Hands off our bank deposits—stop ‘bail-in’! 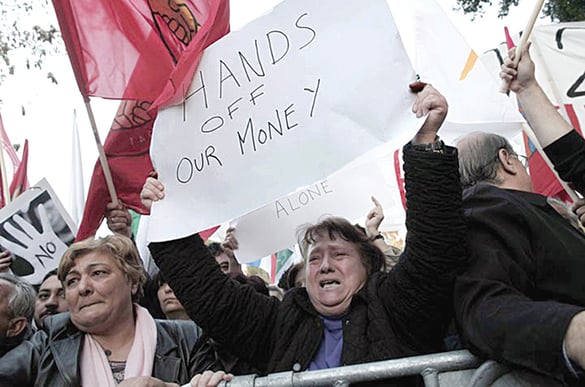 The faces of these distraught depositors in Cyprus in 2013 tells the story:  their savings accounts were "bailed-in"—confiscated—to bail out the failing Bank of Cyprus.

No one should have to suffer having their life savings go up in puff of smoke. But it happened in Cyprus, and it can happen here in Australia.

Take action now - sign our petition, and send a message: Hands Off Our Deposits!

Don't wait until the crisis explodes, and it's too late.

Financial markets zoom upward and the real economy collapses, The danger grows that the speculative bubble, especially in real estate will collapse, and bank customers' deposits could be 'bailed in' to save the desperate banks, just like what happened in Cyprus.

The Citizens Party has exposed in detail that existing laws have loopholes enabling bail-in in Australia.  You can read the facts in our publications.

We call upon the Australian government to:

To SIGN PETITION, fill out the form below and click Submit.
The fields indicated with * are required.

For example, did you know that your bank deposits make you officially an "unsecured creditor" in the bank?  This is merely one example of what the major news media do not tell people regarding the question of the safety of their bank deposits.

However, they assure you, your deposits are perfectly safe.

If you're like us, you don't trust mere promises - it's what's in writing that matters.

The Citizens Party is escalating its fight against bail-in with a petition calling on Parliament to scrap bank regulator APRA’s existing bail-in powers and stop the plans that are under way to legislate stronger bail-in laws.

Hands off our bank deposits—stop ‘bail-in’!

TO THE HONOURABLE SPEAKER AND MEMBERS OF THE HOUSE OF REPRESENTATIVES

This petition of concerned citizens draws to the attention of the House that:

Australia and the world are facing a new financial crisis, with panicked financial authorities slashing interest rates and trying to stimulate the housing market to save the banks, which are in grave danger from their excessive mortgage lending and reckless and fraudulent lending standards;

Global financial authorities expect Australia to prop up failing banks through “bail-in”—converting bonds and deposits into shares or writing them off—which will enormously damage individual savers, businesses, charities, superannuation funds and all other enterprises which lose their funds; Legal analysis of the crisis resolution powers legislated secretively for APRA in February 2018 has confirmed they could be used to bail in bank deposits;

The government denies deposits can be bailed in, but admits the law is from the Financial Stability Board (FSB), which applies bail-in to bank depositors;

The FSB and International Monetary Fund (IMF) are directing Australia to implement stronger bail-in laws like those in New Zealand, the EU and the USA, which all apply to deposits;

To stop this planned theft, we therefore ask the House to: